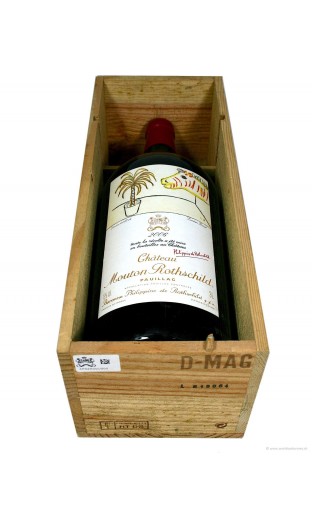 "A major sleeper of the vintage and a great effort, the 2006 Mouton-Rothschild boasts abundant notes of crème de cassis, licorice, truffles, forest floor and cedarwood. The stunning aromatics are still somewhat primary, but the wine is full-bodied with sweet, abundant tannin. "

Discover all our products in stock Château Mouton Rothschild

By buying this product you can collect up to 272 loyalty points. Your cart will total 272 points that can be converted into a voucher of 54,40 CHF.

INFORMATIONS ABOUT THE ESTATE

In 1945, to celebrate the Liberation, Baron Philippe had the imaginative idea of crowing the label for that year's vintage with a suitable design. It was the "V" for Victory, the first in the facinating collection of original works created each year for the Mouton label by famous painters, including Mirò, Chagall, Picasso, Warhol, Bacon,...

In 1973, after a long battle, Baron Philippe finally obtained a revision of the 1855 classification and Mouton was officially recognized as a first growth.

Looking for the perfect gift ?

All of our products are avalaible on stock

Free shipment fees for orders over 1000 CHF (in Switzerland)

In order to avoid shipping fees, your order can be picked up directly in our cellars or shop in Geneva